Apply the Paint as if it were colored dust suggested John Ruskin to art students of the 19th Century.

Next we must improvise.  “When In Doubt; play chromatics” this jazz improvisation advice came through my saxophone teacher, Charlie Williams. Charlie received it from the great Phil Woods. In music like painting artists need to know their chromatic scales and how to improvise with them. Chroma was the term used to refer to a color’s saturation or intensity. Chromatic scales can go in several directions. First, a color can gradually change its saturation, for example a yellow can become more or less yellow. This is different than a color’s value or brightness which is the second scale. Third, a color can change its value by mixing in a white which creates a tint, (a pastel effect).  Fourth, a color can become more of a shade by adding black which also can “soil the color” ( an observation of Delacroix’s). Fifth, a color  can be thinned into a glaze which is most easily done with transparent colors. Sixth a color can be mixed. This mixing can  be better understood through graduated scales .

Mixing  colors is a tricky business. Inexpensive paints tend to mix poorly and results in light absorbing colors (chalky and dull). Mixing complementary colors (colors opposite one another on the color wheel)  will create duller light absorbing colors as well.  These complementary mixes have more diverse material absorbing light than unmixed colors or, colors whose mixture is with their neighbors on the color wheel. Translucent or transparent paints can be mixed with less loss of light than opaque paints.

Let’s examine mixing colors to create luminous grays (or what is  referred to as chromatic grays). A gray concocted from a triad of  secondary colors and the use of white. They can be made to look warmer or cooler. These color based grays are usually more engaging than those made from black and white or Payne’s gray.   Let’s see how it’s done by artists  on their palettes and in their pictures.

Example 1 offers a Turner landscape. His grays are made as I have mine in the following palettes. To understand his color palette and the complementary and chromatic nature of his grays  look at a detail of the image in example 1 ( example 2). 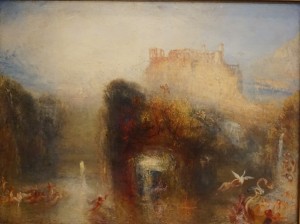 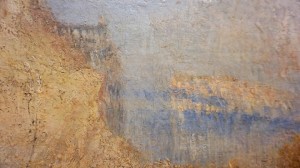 Next we  follow his color mixing principles as learned from Moses Harris, Goethe, and his own practice.  He uses a couple of blues ( greener and a redder blue ) . Ultramarine is redder than Cobalt which is redder than a copper-derived blue like turquoise or azurite or even Prussian blue which are noticeably greener. He uses a couple of yellows like Chrome yellow  which is more lemony or greener than Gamboge which is more orange.  The Chrome yellow mixes with a blue to make a zesty green.  The Gamboge  makes a browner green. It’s  a more light absorbing green because it was mixed with a color which was further away on the color wheel. Turner also used a couple of reds like vermillion and carmine.  Monet will follow this path using a couple of reds, yellows and blues, one warmer and one cooler.  This dual set of primaries allowed these artists to employ vibrant complementary effects and create  effecting chromatic grays.

Let’s begin the mixing.  Example 3 is a demonstration painting I began in my classroom using the palette in example 4.  Example 4. presents the historic palette of two reds, yellows, blues and a white. Observe the warmer and cooler nature of each pair (if we think of orange/red as our base for hot).  Such as  Ultramarine blue which has more red than the adjacent Schevening Blue Light (like antique azurite). For example, one yellow is closer to orange than the other and, one red is bluer than the other. I have stretched the colors down so you can see as a color is thinned it is often brighter (the white substrate reflects light back through the pigment).  With transparent colors they become more apparently saturated.  On my palette I gave each color a  code letter (example 5). 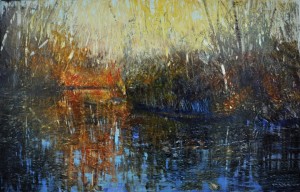 example 4. the palette before mixing. 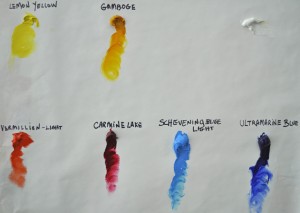 example 5 the palette with mixes. 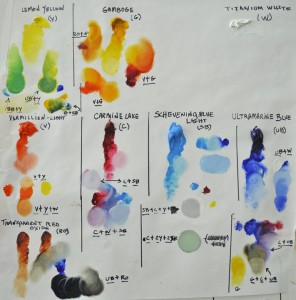 Observe that I have given the abbreviated formulas beside each mixed color (like, v + y + w ). Notice in the first panel I have a lemon yellow (cooler because it is closer to green) which I have mixed below with SB and UB.  The SB + Y generates a purer green. The UB with its greater redness makes a duller green (more light absorbing).  In the next panel you see Gamboge yellow. Notice when thinned it appears to be not only brighter but also, more intensely yellow. It’s saturation has increased. When G (Gamboge) is mixed with the transparent red oxide (RO) it gives a warm golden appearance. Both colors here are transparent. When mixed with the Carmine Lake (C) it gives a range of radiant oranges. Again both colors are transparent. When mixed with the more opaque Vermillion light (v)  the effect is a flatter or less reflective orange.

Now let’s mix for chromatic grays. If you look in the lower left corner of the palette you see transparent red oxide (RO) mixing with UB.  This mixture of two transparents creates  luminous grays which have either a blue cast or a warmer brown cast as you see. Look over at the Carmine, SB and UB areas. Here I mixed a variety of grays. They are easier to follow in this close-up example (example 6). 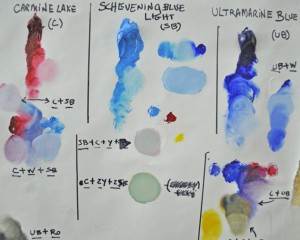 The Carmine makes soft pastel violets when mixed with white and SB. This violet will be the source for making  chromatic grays you see in the adjacent column under SB.  Notice the formulas alongside each pastel gray. These grays are opaque and become duller as the quantity of white is  diminished. These three colors (Y,SB & C) make a broad range of grays extending from minty green-gray to lavender gray. In the next column under UB the grays are  made from G, UB and C.  Because all three are transparent colors they can be thinned to give a luminous gray with little or no white. Also notice that the UB offers  less red effect when mixed with white ( see UB + W).

My last palette example (example 7) shows grays made with white and different yellows ( G and Y) and different blues (SB and UB) and Carmine.

These next examples demonstrate the effect of discovering a chromatic gray by painting or glazing a complementary color over another in  semi-transparent mixing. In each case I begin with a  preliminary painting then, glaze over it with  deep complementary or tertiary  colors (colors only a third of the way opposite on the color wheel). example 8 presents a painting with an originally yellow meadow. This will be overlaid in  example 9 with a dark violet carmine (UB + RO + C). Yellow leaf shapes will be discovered through selective deletions in the overglaze. 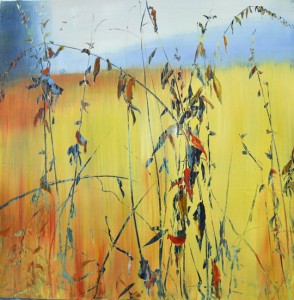 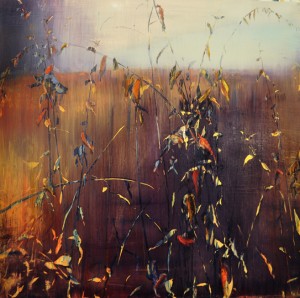 In the final two examples (10 and 11) I have returned to favored subject of mine, Grand Central Terminal. Here, I overlaid dark glazes (UB + RO) over pre-colored substrates. I then added opaque tints. I  enjoyed the dark chiaroscuro effects from these deep (black-less) colors contrasting against lighter tinted areas. I only clearly articulated the Kiosk and its Clock. 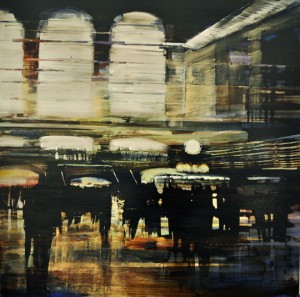 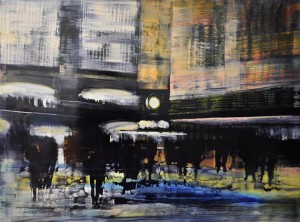 Lastly, I want to invite you to my exhibition opening this Sunday, March 1st at the Adam Cave Gallery in downtown Raleigh, NC.  I hope you can join me there from 2 to 4 pm. The paintings range from works on copper to anodized aluminum and the subjects flow from forests to Paris. Here is Paris Traffic (example12). 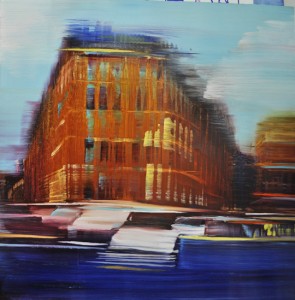