According to the Museum of Modern Art, decalcomania has its origins in the 18th century but would later be popularized by surrealists like Max Ernst and Oscar Dominguez. I think the origins go back much further perhaps as early as the Sung dynasty painters 1000 years ago or, in Europe as far back as the 1600’s in the painting and printing experiments of Hercules Seghers.
Here’s how it works. The artist’s ink or paint is laid over a smooth hard surface ideally, glass or metal or plastic. The paint can be manipulated on this smooth surface and, while it is still wet it is transferred onto another surface. The two surfaces, the clean one and the painted one are pressed together. The pressure of the transfer and the thickness and viscosity of the paint affect the resulting imagery. Exotic repeating fractals resembling tributary branching systems as found in lichens or rivers or frost on a window are revealed when the two surfaces (transferring source and proofing surface) are pried apart. The result provides two images, one emerges on the original surface and the other, a mirror image appears on the counter-proofed surface.
This transfer process is familiar to printmakers because it imitates printing monotypes but, without the etching press. Surrealists like Andre Breton, Max Ernst and Oscar Dominguez liked the process because part of the surrealist agenda was to reveal evidence of unconsciously driven and stimulated imagery. The otherworldly or dreamlike patterns found in decalcomania suited their purposes.
Artists like Ernst would exploit the transfer effects revealing caves, trees, rock formations. You can see this in example 1 by Max Ernst. He glazes over some the decalcomania patterns, tinting them. And, He paints solid sky colors over other areas to suggest a landscape’s horizon.
Example 1. Max Ernst, 1930s, Chimeras and Landscapes. 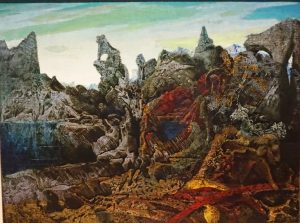 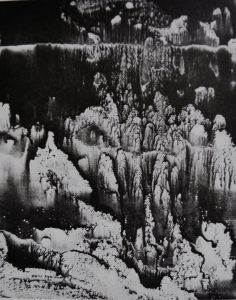 In the late 18th century Alexander Cozens noticed how we project the idea of landscapes into accidental blots of ink and paint. His transfer blot method was another early form of decalcomania. The pleasure of discovering natural imagery, landscape imagery through the manipulations of decalcomania would continue through the present.
China’s Cultural Revolution from 1966 to 1976 forced intellectuals and artists into enslavement and imprisonment. Mu Xin was one of those artists. While confined he was given ink and paper to make his political confessions to the authorities. He saved small pieces of the paper and ink and created mysterious landscapes using decalcomania effects (example 3). Later in his life, after an exile in New York, Mu Xin was welcomed back to China as a national treasure. A contemporary museum houses his works in China today.
Example 3. Mu Xin, ink on paper with drawing and decalcomania effects. 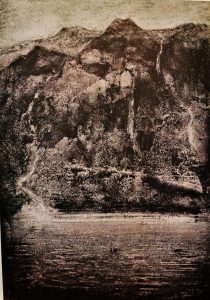 To give you a better idea of the decalcomania process, its potential for generating alternative patterns, and the enhanced manipulation of decalcomania effects I have prepared the following examples.
In example 4 there are two images. The image on the left is identified with a red “A” . It is the primary surface. I began by manipulating wet oil paint on it. I used paint of varying thicknesses, gestures, and viscosities and colors. This surface (I used a white enameled aluminum composite known as Dibond) was then pressed onto another white square of the same material. Some of the paint was transferred to the second surface. The result is indicated by the red letter “B”. After the transfer process both surfaces looked similarly abstract but, appeared as mirror images of each other. Example “A’ has received additional brushwork after the transfer process. This accounts for its different appearance now.
Example 4. The two squares: Here are both original and counterproof image except the original was further manipulated with brushwork to appear more garden-like with overt botanical forms. These were later additions but applied while the paint was still wet. Square “B” has received no additions and appears just as it did when the two squares were pried apart after the pressing.
I repeated this process (example 5) using the same photo reference material you see in example 6.

The result of repeating the process in a Zoom class demonstration can be seen in example 5. The first image in Example 5 is the same one identified by a red “A” in example 4. Its adjacent image shows you a different set of decalcomania transfer patterns even though I prepared a new surface similarly. Surprise is built into the process. How you manipulate and look into the abstract fractal patterns determines your image’s destiny. You may decide to just leave the total abstraction as it initially appears after prying the two surfaces apart.
Example 5. Two side by side decalcomania images sharing the same photo reference but, each is the result of a different transfer session. The second image was the result of a demo in a zoom class. 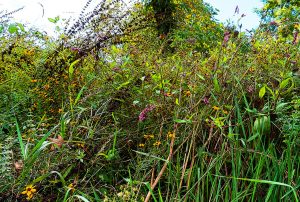 Here is an enlargement of the image “B” from above. 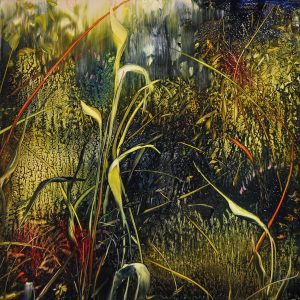 On Tuesday, December 22 at 1 PM I will be giving a set of demonstrations and talk on bringing Realism into Abstraction. You can learn more and register for this single event zoom program at daviddunlop.com .Registration is $50.