Even before Ulysses ports were starting points for adventure and welcoming sites of homecoming. They have been the nexus of cultures. New ideas arrive as others are exported. Life is sustained and enriched as trade passes through them. Inevitably, they have become the subjects of painting.  They have always embodied industrial life, technology, labor, and the prospect of a journey.

Vermeer, that master of 17th century intimate interiors could not escape the lure of his home port (View of Delft, example 1). Two centuries later the genre continued to be a vehicle for painting experiments as we see in two examples here. One is by J.M.W. Turner (example 3) and the other by his younger contemporary, Richard Parkes Bonington (example 2). They played with the canon: its compositional structure, its atmospheres, and  the visual noise of its simultaneous multiple activities. 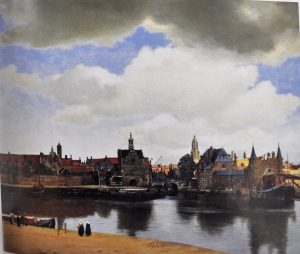 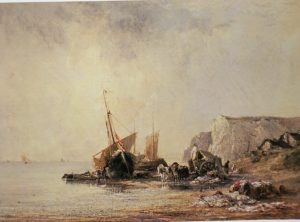 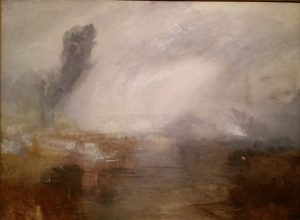 The preceding examples demonstrate how artists became progressively more adventurous, more interested in the emotional experience evoked in painting and less interested in recording visual information. As we move into the early 20th century we see artists like Albert Marquet (example 4) and George Bellows (example 5) are still inspired by the themes and shapes of harbor life but, they respond with more expressive exaggerations of shape, color and contrast. Their departure from paintings of fact has carried them to the edge of abstraction through their bravura expressive brushwork. 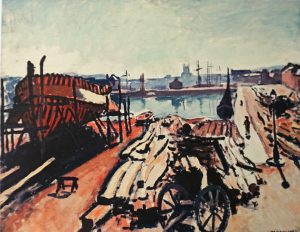 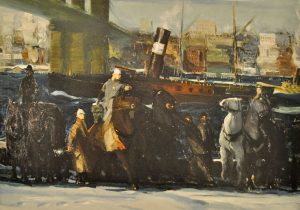 Harbor subjects continue to mesmerize artists. By the second decade of the 20th century we see cubism and geometric abstraction using harbors as fodder for their experiments. All that geometric confusion in  Harbor traffic rattling against mechanical and human activity provided a stage for both abstract reduction as well as rambunctious expressionism.

This is where I come in with my examples.  I too have been abstracting bridges and port activities. The lure of geometric forms stacked and layered over one another in varieties of color, texture, and value comingling with their chaotic reflections invited me to experiment.

As a high schooler in St. Louis I rode my bike and later drove my father’s car to the Mississippi riverfront.  I took dates there. I am not sure they shared my romantic fascination for that riverfront. Its tangle of barges, bridges, cranes, tugs and riverboats set my mind free to explore. I have returned there repeatedly as an adult. I still find the riverfront a feral muse.

On that riverfront I found bright sunlight popping reflective rectangles in chiaroscuro contrasts. Here were opportunities to embrace the visual confusion, to evoke it and reorder it within the  constraints of the painted rectangle. What follows is a succession of steps. They begin with an older painting of a midtown New York cityscape whose colors and shapes provided an underpainting which  could later be selectively harvested after covering it over with a blanket of oil paint (step one, example 6). 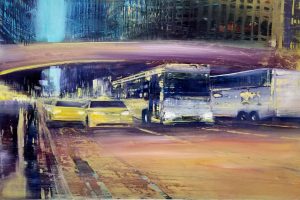 Examples 7, 8, and 9 trace the later development of the painting. You can see from the beginning in example 7 where I have deleted an area for the supporting bridge column. You can then follow me through my subsequent deletions and additions.

Example 7. Step two, covering and the underpainting with initial deletion. 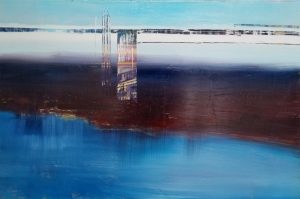 Example 8. Step three, further deletions and additions as the image is constructed. 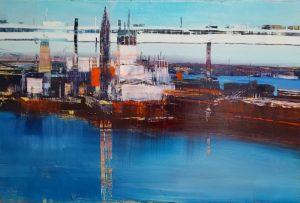 Example 9. Step four, the current state of “Riverfront” 24×36, oil on Dibond. If you were to reverse the Bonington example (example 2 above) and, add bridges above the horizon you would see that I employed a similar composition. 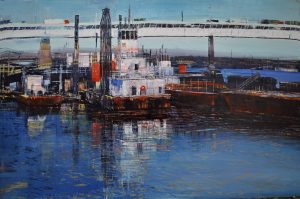