The motif of painting wet city streets was not in the pictorial canon prior to the mid 19th century no doubt because city streets were rarely bricked or cobblestoned.   Even those surfaces were not as smooth and evenly reflective as our current pavements. Therefore, thinking of wet reflective streets as aesthetically charged mirror-like subjects would not occur to painters until the late 1800’s.

If we revisit the famous 18th century Venetian city painters like Canaletto and Guardi we don’t find reflective rainy piazzas. We can find with different times of day and weather but not, rainy and reflective. If J.M.W. Turner paints a city with reflections he relies on a canal, river, estuary or bay in London or Dieppe or Venice not their reflective wet streets. 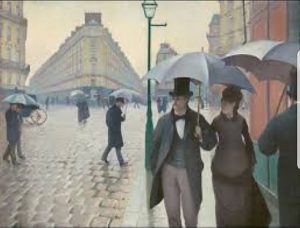 With Caillebotte’s success painting wet Parisian streets the model for painting the subject is established.  And, the floodgates are opened on the motif.  The mid 19th century fascination with middle class urban life also stimulated the idea of pursuing wet reflecting cities and pedestrians. By the early 20th century both photographers (Stieglitz) and painters engage this subject as they search for new ways of seeing and expressing city life.

By the late 20th century we find artists incorporating  theme of wet streets with earlier schools of modernity like futurism, cubism, chromatism. As an example of this new hybrid of wet streets and modernism I offer Bill Jacklin’s painting of “Sun, Rain, and Snow over Fifth Avenue II” (example 2). 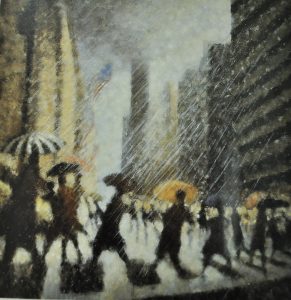 Entering the 21st century brings us a flood of city-in-the-rain works. Some of this new-found allure to wet streets must be the result of electrified colored lighting being re-amplified by the wet streets. Reflections can be extended and colors exaggerated.  The night becomes as vivid as the day.

I have selected a couple of examples of the best of this 21st century fascination with wet streets.  First consider two works by the exceptional cityscape artist, Ben Aronson who early came under the influence of Wayne Thiebaud and then extended and redefined the aesthetic parameters of cityscapes.  Example 3 is a small oil sketch of wet streets in Cambridge Massachusetts. The delicious spontaneity of the bravura strokes evokes the splashing spontaneous movement of  traffic over wet streets. Example 4 is much larger, a 40×40” oil linen. Here color contrast and faded reflections snag our attention as we thematically return to Caillebotte’s Paris. 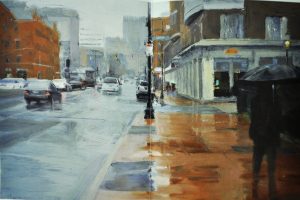 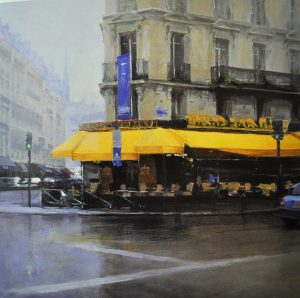 I continue to surrender to the spell of big city lights moving across wet avenues as you can see in my following three examples.  Example 5 presents the underpainting and first step for my painting “Bright Lights”.  This example provides a substrate of varieties of color and pattern which I later plan to harvest in my over-painting which you can see in step two, example 6.

Example 5.  Step one, the original underpainting for “Bright Lights”, 36×36, oil on Dibond, 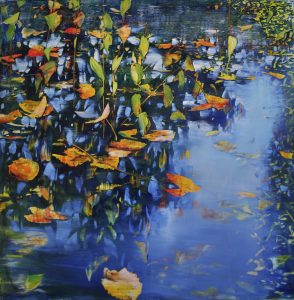 Example 6. Step two. Initial covering over the underpainting in example 5. 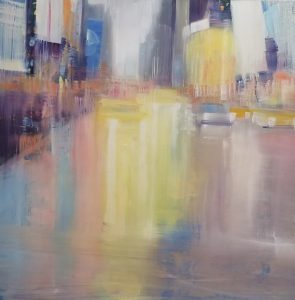 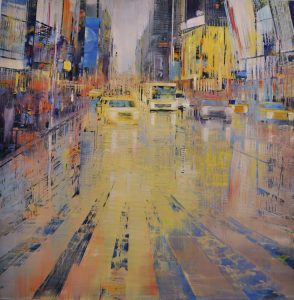 Having discovered the varieties of pattern, color and light in painting wet streets I also explored the sensation of reflectance on polished surfaces like marble floors. Their reflectance qualities resemble that of still water or ice  but only the context of the subject.  The context guides the viewer to the appropriate perception of the space. 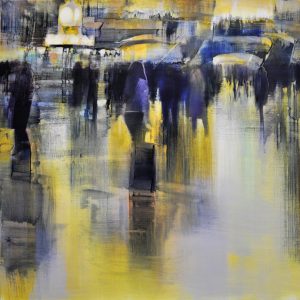 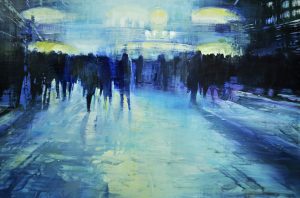 I hope you can join me in my online classes this December.  I offer  explorations in art history,  painting demonstrations and personal critiques in each class. You may register at daviddunlop.com for either the Saturday classes or the Tuesday classes or both. You can also register for my one day webinar workshops . On the Home page you will see a box denoting “online classes”. This Tuesday, November 24th you are invited to join me for “Painting Skies”. It begins at 1 pm. I will present and demonstrate a variety of skies in mixed media and oils.