According to Professor Adrian Bejan’s book, Design in Nature, a scientific treatise on flow states he observes “The configuration of a flow system is not a peripheral feature. It is the defining feature”. Flow determines the shape of a system and its structures. And, Flow is omnipresent. Everything is in motion whether it is perceptible in terms of geologic time or daily routine.

In painting landscapes we consider the role of wind, water, and geologic forces in shaping natural world appearances.  Rivers meander through serpentine patterns as they push against shorelines. Weaker embankments give way to reveal new bends in the flow.

When the turbulence/speed of the water is high it alters the shape of the land more severely and quickly than when it is slow.  A turbulent/fast stream presents a rougher surface than a slowly moving one.  The more slowly the water moves the more static and reflective it appears. Slow bodies of water spread out like river deltas or marshlands. Tidal marshlands have meandering channels as evidence of hosting periodically faster flow systems. Paintings reveal the unifying speed, direction, and patterns of flow systems.

When walking through tidal marshlands I see the traces of the water channels and their relationship to their marshland. I see serpentine turning patterns as the water seeks to return to the sea through the uneven resistance of pockets of land and grasses.

Examples 1 through 4 present a marshland with a wending tidal waterway. For purposes of pictorial unity I have waterway carve its slow serpentine path through openings in the marsh. Because it is a slow meander we do not experience much movement in either the reflections or the surface of the water. We experience quiet and smooth reflections.

Example 1. Step one, Serpentine Marsh, oil on brushed silver Dibond, 24×36”. A dark mixed set of translucent oil colors are laid down so that I may look into them and find the gentle emergence of a watery pathway. 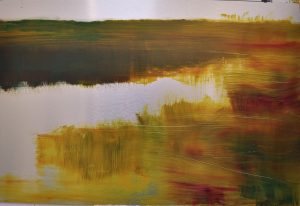 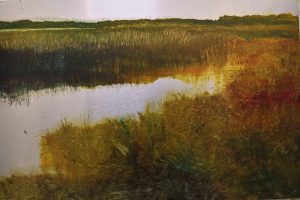 Example 3.  Step three, Serpentine Marsh. Shaping the cloud patterns and colors and reflecting their light onto the smooth slow surface of the water. 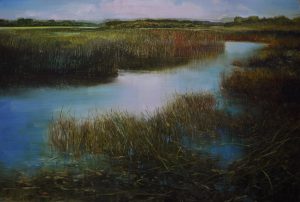 Example 4. Step four, Serpentine Marsh. Present state of the image. I blended in more water in the lower right quadrant to spread out the channel, break up grassy clusters, and extend areas of color, texture and contrast. 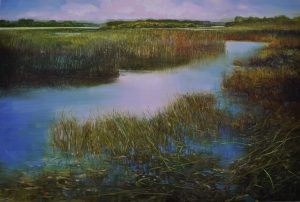 In examples 5, 6, and 7 you see my “Spanish Water Garden”. Step one presents my initial laying in of forms and colors. I try an experimental palette here. By step two I am dissatisfied with the direction of the new palette.

Step two also appears too segmented and divided. It lacks a feeling of harmonious flow from front to back. In step three I simplify the composition, atmospherically unify the picture, alter and simplify the palette.  The textured surface alludes to plant material sitting in stillness. There is only the movement of light across the garden and the whispers of gently moving tall grasses. The water itself appears almost stationary. 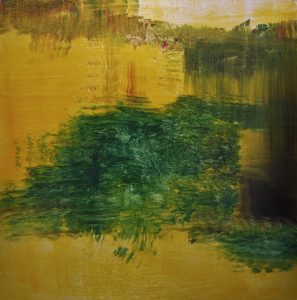 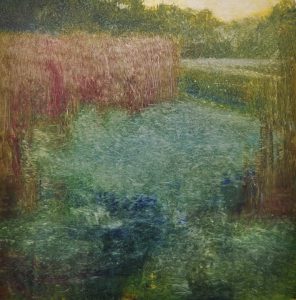 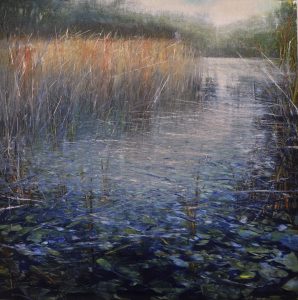 Finally, I present another slow body of water spreading itself out through a shallow marshland (example 8). The dynamism here is in the color contrast of the purplish sky and water against the yellow meadow, tree-line and grasses. In the second example (example 9) I decided to allow the water to spread itself further across the meadow between the contrasting marsh grasses. 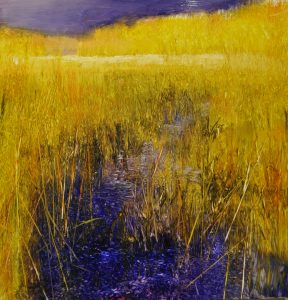 Example 9. Step two and current state of “Meadow Marsh”. Here the water transitions in both value and color. This transition expands the distance in the picture. The foreground advances more and the background recedes more while preserving color contrast and compositional unity. 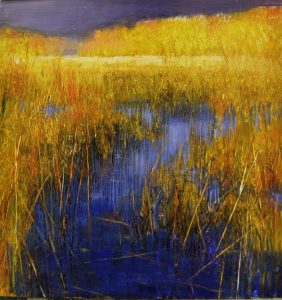 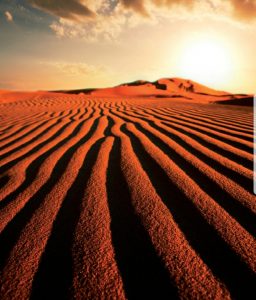