All forms of life recognize patterns as prompts for sexual arousal, for eating, for fleeing, for fighting. Most mammals rely on patterns delivered through smell, hearing or vision. We are most dependent on recognizing the patterns accessed by vision. We recognize our world through familiar patterns. Recognizing and making landscape paintings depends upon a culturally specialized set of patterns.

Anthropologists have discovered cultures who do not recognize pictures printed on paper or, don’t recognize linear perspective as a system which creates an illusion of credible space on a 2 dimensional plane.

We must learn these familiar patterns and then as artists, we can expand upon the set of conventional patterns. Here are some examples.

If I take a photo of a garden (example 1) and then a photo of a rose against the sky. Next I  layer these two images.  My mind wants to create a singular identity from the fused images; a rose in a garden.

I can separate these two subjects with different colors and textures. But, as long as I use the familiar rose shape and the foliated patterns of plants in a garden my brain wants make a single unified pattern, a single hypothesis.  I fused the parts into a new whole. It may appear different from other gardens I have known but, it has enough familiar patterning for me to make a “Rose in a Garden” hypothesis.

Example 1. Photo of a garden from Sintra, Portugal, 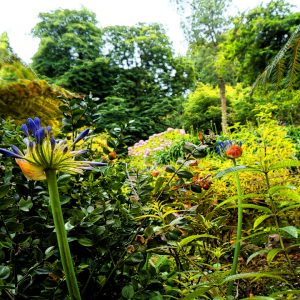 Example 2. Photo of a rose against a blue sky superimposed on the same garden. The result is a new garden hypothesis, a slight expansion of the old model or pattern. 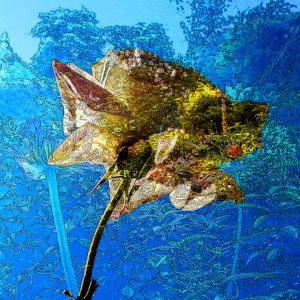 Let’s try some more engineering of our pattern knowledge. We have learned that objects of the same size which are closer to us appear bigger than those farther away.  This is true for areas as well as objects. If I take a photo of a stream (example 3) and then compress and colorize that image it will appear foreshortened. It will not appear especially unrealistic just foreshortened (example 4). 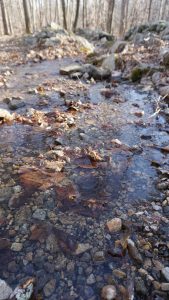 Example 4. The compressed, colorized version of that photo with a greater experience of foreshortening. 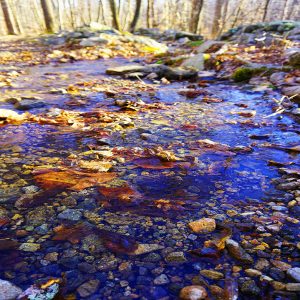 I can use the image in example 4 as starting point for further manipulations but, I will maintain the pattern of the progression of larger to smaller horizontal bands throughout my abstracting manipulations.  Examples 5 and 6 illustrate two different responses to the pattern initiated in example 4. In each case we are still able to read the image even though it has departed enormously from the original photo. 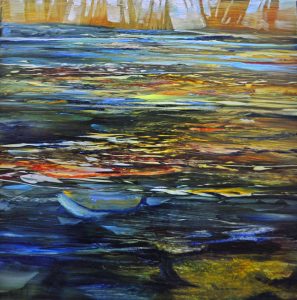 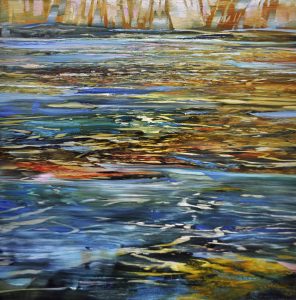 Consider this, If I lay down a hub-and-spoke design or pattern of receding triangles converging toward a common eye-level (and, in this case toward a common horizon as well) and a central area of convergence I will have constructed a classic landscape design. It should feel familiar as a landscape even though there is a quality of individuality to the image.

Example 7, Step one lays down a classic compositional landscape form. 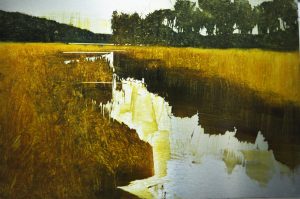 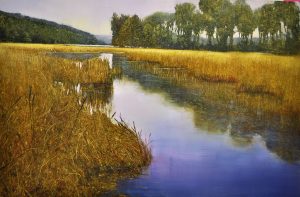 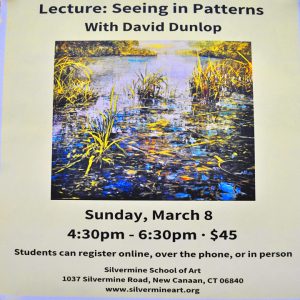