Transparent water gives the mysterious feeling of looking through a window with mirror-like qualities. If you look directly down into shallow water you can see through to objects on the stream or pond bed. As you raise your eyes reflections on the water’s surface interfere with your view of the bottom. At an angle of about 45 degrees you notice that reflections have almost completely blocked your view of matter below the surface.  This is a beguiling puzzle for painters.

I want to show you how to reveal the mystery of reflections on water and, the conflicted perception simultaneously revealing matter below the surface. We begin with a composition, an inverted arched window  with light and luminosity at the top and shadows at the bottom.  To do this I start with digitally altered photo. This photo does not include my composition; that will come later.

The initial digital photo presents a vernal forest pool (example 1). This photo is then layered with another photo. This second photo has undergone radical alterations in Photoshop. Example 2 presents another photo (as taken in the camera) while example 3 presents the same photo in the middle of its alterations.  Next, photos 1 and 3 are merged into one image, example 4. Example 4 undergoes internal cloning of selected areas.

Example 1. Step one, Photoshop effects as seen in first image of a the “Forest Vernal Pool”. 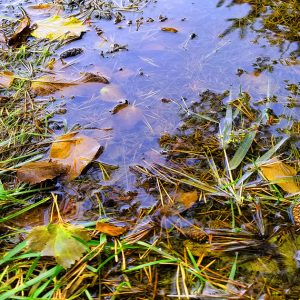 Example 4. Step 4 the merging of the two photos and after further Photoshop cloning effects. 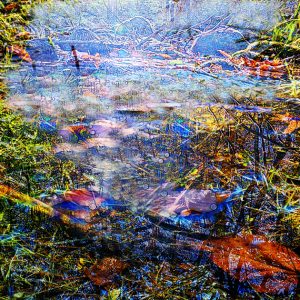 The final digitally altered image was used to as a starting point for a 12”x12” demonstration on white Dibond. As you can see the  image departs from its source material. Now we are following the paint not the photo. Here I impose my original inverted arch composition and, my theme of traversing a translucent pool into misty light. The resulting painting is presented in example 5.

Example 5. Forest Vernal Pool as a the 12×12” demonstration, 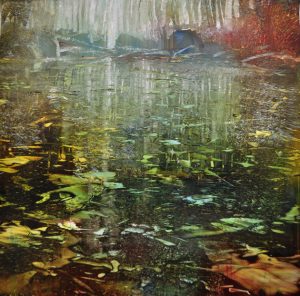 I enjoyed the experience of crossing a pond to travel into misty light so, I decided I would try the design on a larger scale, 24×24”. This time I used a brushed silver Dibond as the substrate. As with example 5 I began by staining the surface with  smears of blue and yellow acrylic inks (example 6). In the next step I covered the surface with various translucent oil paints (example 7). Finally, example 8 presents the image in its current state. 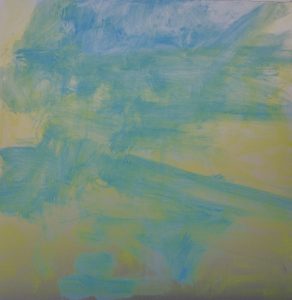 Example 7. Second step of this painting, loosely laying in a bath of translucent oil colors. Notice how the design is still present,. 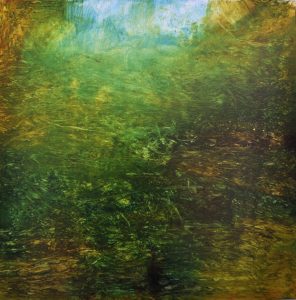 Example 8. The third step and current state of the painting, 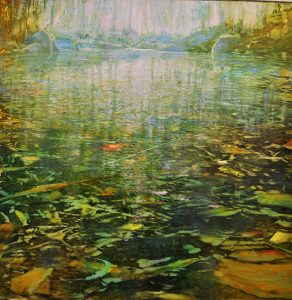 A recent painting, “ Mid Winter’s Marsh” has undergone a similar process. I posted the image earlier but, I have since revised the work to offer a greater feeling of translucence to the water in the foreground. Examples 9 and 10 illustrate this transition. 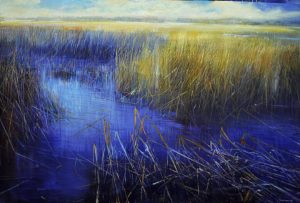 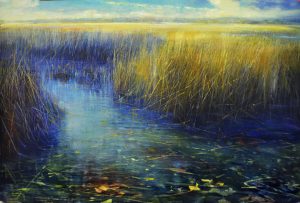