We look for meaning. We direct our vision (our attention) toward areas promising expected information. The hypotheses we generate are the result of previously collected experience and information now newly projected onto the world.  Here are some of examples of how we project our hypotheses.

We don’t register all the visual data before us, which would be impossible. There is an ever-changing soup of reflectance patterns before us and from this soup we select and identify.

After a successful eye operation enabling a previously blind man to see the doctor asked what do you see? The patient did not know how to interpret the question but, responded that he saw a dizzying swirl or soup of what he assumed were shapes and colors. The doctor asked if he could pick anything out from the visual soup.  He said no but, he was curious that sound seemed to be coming from some wiggling shapes. After touching the shapes he guessed these might be the doctor’s lips.  Without previous visual training the patient could not find utility or meaning with his new vision. We see what we think our senses are detecting. We don’t see the sensations. We see what our neural tissue has constructed from past experience and correlated with selected sensations.

Our visual sensors pick up comparative differences in color, edges, value, relative distance, motion etc. Our cortex looks to unify these disparate senses into a single hypothesis based upon previous experience. It takes about 100 or more milliseconds for this process to deliver a conscious perception, to create our hypotheses.

I began this set of experiments with a couple of photographs and, with the idea that we always generate a hypothesis. This hypothesis can redefine previously sensations. It can change their meaning.

Let’s begin with example 1, a photo of a marsh. In example 2 I invert the photo. In example 3 I look into the inverted photo and redefine the information in light of its new orientation by partially overpainting the photo with oils. 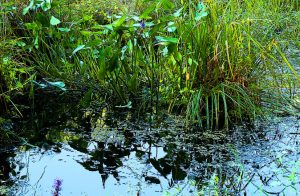 Example 2. Step two, the photo is inverted and my mind finds a new landscape from the same old information. 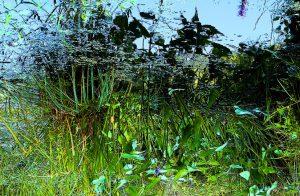 Example 3. Step thee, I over-paint the inverted landscape finding a place for sky, lake and translucent pond effects. The former flora is converted to fit this new hypothesis, a lush landscape with water under a pink sky. 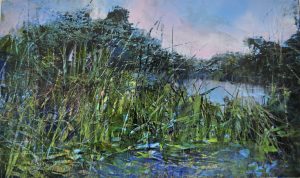 The next sequence begins with a photo of a 1660 Dutch floral table cover (example 4). This photo is coated with polymer gloss varnish and over-painted with oils using loose abstract gestures leaving only hints of the 1660 information. In Step 2 (example 5, a photo of flowers) I introduce the idea of an arc of roses loosely resembling the shape of a cornucopia. The area to be covered by the shape of the arc of roses is first covered with acrylic titanium white.  Next I create the form of the rose cornucopia using oil paint, brushes and squeegees to get to the image you see in example 6. 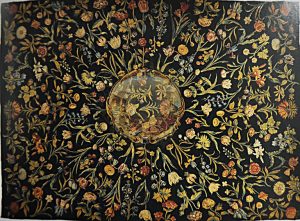 Example 5. Step two, the photo of the roses, 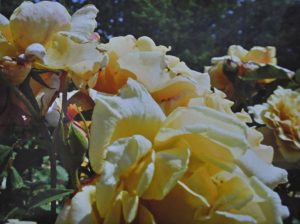 Example 6, Step three, the painting of the roses over the older visual information. 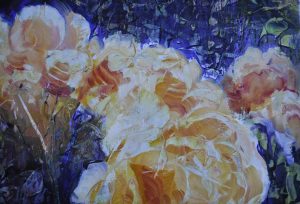 The final examples demonstrate the deconstruction of photographic information into different ambiguous images. Example 7 presents a photo taken from within the Metropolitan Museum in NYC. It has been altered using Photoshop. It resembles a painting here because of its ambiguous imagery. Example 8 begins with the same image but, the photo’s inks were altered to stay wet long enough to be treated as paint in order to create new imagery from them. 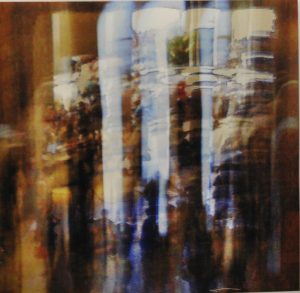 Example 8. Step two, the same photo but, printed to allow me to physically move the inks about (as if they were paint) and create a new image. The original image became a painting with new visual effects, and new and more legible reading. 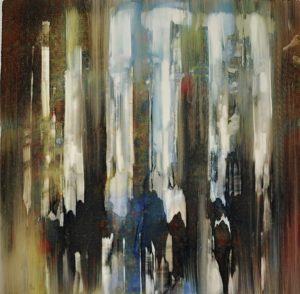 I have a couple of openings my upcoming 5-Day intensive workshops. They are each called “New Horizons and Old Traditions in Landscape”. The first week runs from Monday, March 30 – April 3. The 2nd week runs from Monday April 13 – April 17. Fee is $875.  These intensive workshops pack a smester’s work into 5 days. To register contact the Silvermine School of Art in New Canaan, Ct. at 203 966 6668 ext 2 or www.silvermineart.org

In other news I hope you get to see my article in the latest Artist’s Magazine.