Gathering to shape and design buildings, monuments and towns begins with Gobekli Tepe in Turkey 10,000 to 12,000 years ago. The early monuments were 12 meter tall T-shaped totems. If we fast-forward to the present we still see this as a fundamental design form.

In drawing/painting we can play with this form to enhance its visual effect. We can bend it, foreshorten it, stretch it, multi-layer it and recombine it and more. With this flexibility in mind I began to rearrange some of New York’s cityscape. The Brooklyn Bridge offers many possibilities for elastic redesigning to me.

In earlier blogposts you have seen my experiments with the Brooklyn Bridge.  I continue to experiment with that iconic Brooklyn Bridge as my elastic muse.  But, I haven’t shown you how I diagrammatically recompose the Bridge using perspective distortions and rhythmic patterns. Allow me to do so now as well as demonstrate how I build spaces that are part architectural and part natural  (biomorphic patterns).

This idea to merge two opposites, the rectilinear and the biomorphic (nature’s flora) begins with sketches in my mind, in paint, in Photoshop and in drawings.  I begin with visits to the Brooklyn Bridge and lots of photos. I select one (example 1). I put it through many changes, layerings, reversal, etc and produce a variety of new images like example 2.

Example 1. My photo of the Brooklyn Bridge, 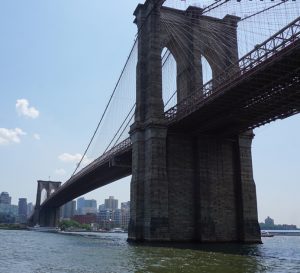 Example 2. An altered image of the Brooklyn Bridge using example one and others. 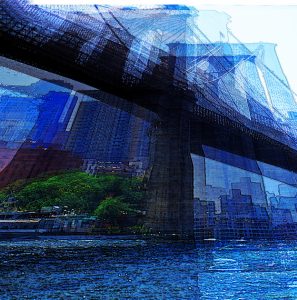 I try out possibilities with drawings (example 3) and smaller oil studies (example 4).  I see what texture patterns my tools can generate as well as my hands, and what color contrasts are engaging.

Example 3. Diagram of “Brooklyn Bridge Ascension” 36×36 using 3 point perspective. Note how ascending verticals appear to converge to a common vanishing point above the diagram while horizontals stream to a lower vanishing point on the right. 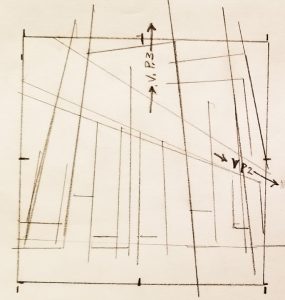 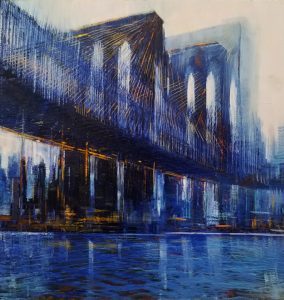 Example 5. An earlier version of “Brooklyn Bridge Ascension,” The Bridge needs another leg of support. 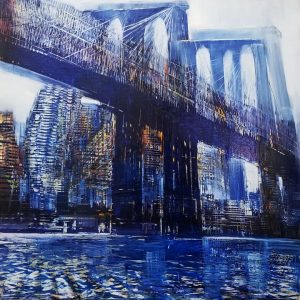 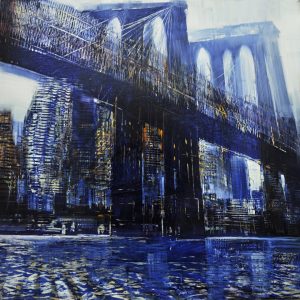 Contrasting the textures and softer forms of flora against architectural patterns is another favorite theme of mine. I am in the early stages of such a work now. Example 6 presents a diagrammatic concept for the image you see evolving in example 7, “Fifth Avenue and 59th in Rain”. 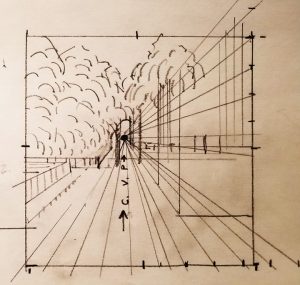 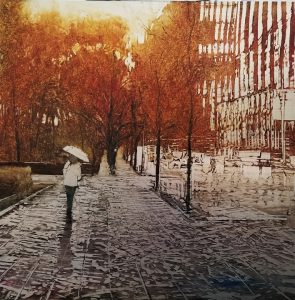 These works are scheduled to be shown in May in my solo show at Susan Powell Fine Art in Madison, Ct.