The delight we find in arranging ornament and discovering  ornamental patterns reaches back to the beginning of human history as we carved and painted our stony walls.  Across time and cultures the patterns grew in complexity.  Even in our most regressive moments we found opportunities to embellish with patterns, colors, and symbols. Deep in medieval Europe around 800 CE the back cover of the Lindau Gospels offer a rich example of our fascination with ornamented patterns (example 1).  We enjoy interlocking curves suggesting vines, glittering colors reflected from jewels, and the rich arrangement of colors and shapes.

Example 1. Medieval Back Book Cover from the Lindau Gospels, 800 CE. 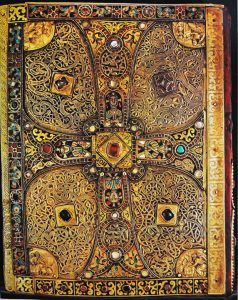 The arrangement of colors and shapes  within confined areas and along the edges of confined areas are well suited to how we pay visual attention.  Gustav Klimt as well as his mentee, Egon Schiele, enjoyed and employed  ornamented patterning in their paintings in the midst of the  Art Nouveau  movement in Vienna around 1900. Medieval decoration acted as a source for Klimt and other Art Nouveau artists. If we examine some of his landscape paintings from the period it’s easy to see they are as much ornamented patterns as they are landscapes (examples 2 and 3). 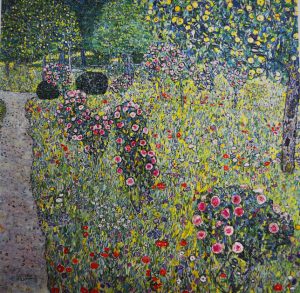 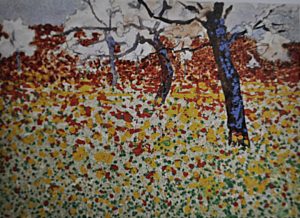 Klimt and Schiele, like their medieval masters exaggerated colors, isolated shapes, and simplified forms into turning , twisting shapes. Following that idea stream I created a landscape of compressed color tension as well as a compiling a series of similar shapes within a unified design form which offers the ambiguity of  perceiving space or a flattened map-like pattern.  The result is my painting in example 4. 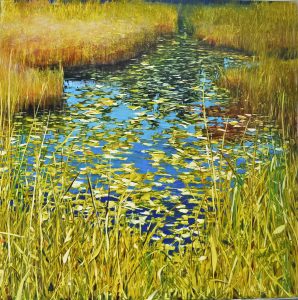 My next two examples continue with the theme of arranging jewel-like shapes rhythmically in receding space.  My first example (example 5, “Hamonassett Skies” ) was first introduced on Instagram but, has since been revised and further simplified.  The next painting is a work in process for me.  Here I present three sequential steps for this work (examples 6,7, and 8)  so you can follow my process. 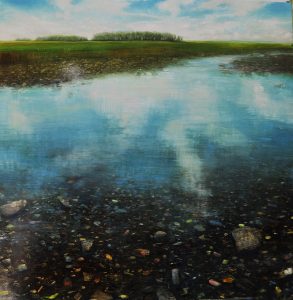 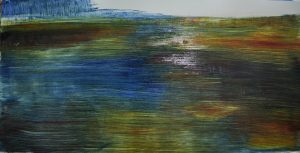 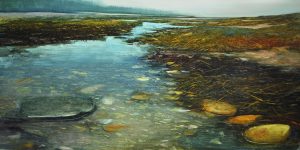 My title for this blog post promised the inclusion of atmosphere partnered with pattern.  The following examples address the issue of  simplifing patterns along edges and interrupting  those edges with broken patterns as well as fog. These images also present distilled forms while simultaneously suggesting the  expansion of space. Example  9 presents  a Lakeshore in fog. This image is 24×24. I decided to expand the size of this image and try floating it over an older painting (example  10, under-painting and example 11, over-painting). This served to frame the image and add an additional ornamental complication. 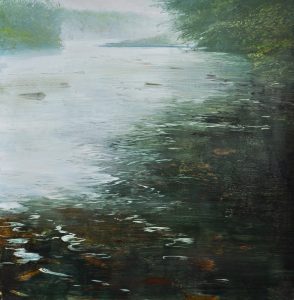 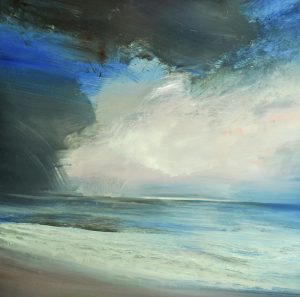 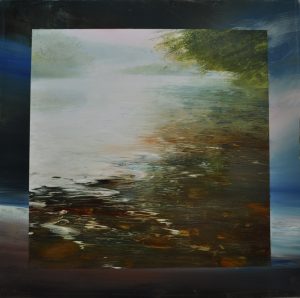