In rural Missouri just west of St. Louis are lost pieces of the Missouri River.  Occasionally the great river changes its course and leaves a trace like a horseshoe lake as a reminder of its past channel. Near one of those abandoned river channels  was a salt water swimming pool called Castlewood.  You could find it at the end of a tar-sprayed dirt road with a soft Ice cream store and a pinball bar and restaurant. I was attracted to the pinball machines, the taste of the salt water, and the allure of the bubbling road tar on hot summer day.

The pinball machine graphics triggered a fantasy life. Vivid colors, big city car chases and lots of action on a sloping electric table. These were qualities I would one day borrow for my paintings, especially those swooping perspective distortions and jittery flashing lights. Other artists have shared my affections for bright colors, motion, and perspective distortion.  Contemporary artists like Yvonne Jacquette and Wayne Thiebaud have used such distortions which may be traceable to the color, perspectives and actions of pinball machines. Consider example 1 by Wayne Thiebaud. Here are vivid colors and ribbons of perspective-distorted highways with a big city ambiance. 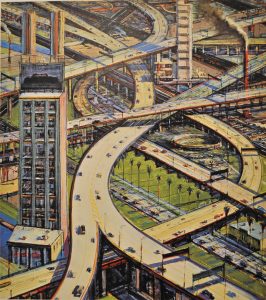 To find a pinball stage set you have to build one. I begin with photography and a willingness to stretch the capabilities of curvilinear  perspective. Example two is my original photograph as yet undistorted. Example three demonstrates how I began my painting.  Example four  presents the image as reversed, recolored, compressed and redesigned in its current state. 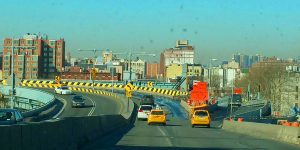 Example 3, My first step in creating the painting. 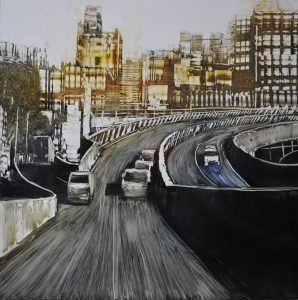 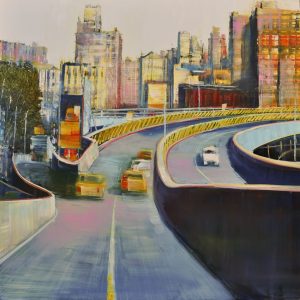 Neither I nor the graphic designers for the pinball machines began our imagery without precedents.  To convert the box-like buildings into a geometric assemblage I looked to previous cubists like Georges Braque (example 4)  just as Braque looked to the discoveries of Cezanne as he began converting the landscape into flattened geometric planes ( example 5). And Wayne Thiebaud had seen others  from earlier in the 20th century to influence him like  Joseph Stella or Christopher Newinson (example 6) .  We can clearly see how Newinson joined curving perspective to the cubism of Picasso and Braque. 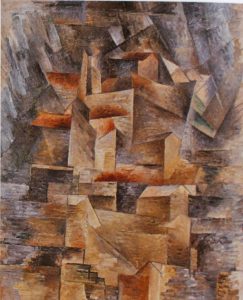 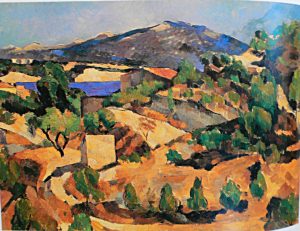 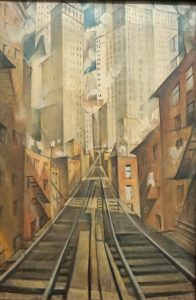 As I continue on this path I tried to give curving and flattened planes a jittery luminous movement (recall the pinball action).  I looked to a local source, the Norwalk harbor bridges. Again, I began with photography and proceeded to layer and distort a set of bridge images into a newly synthesized picture.  Example 7 presents one of my original photos before layering and other distortions. Example 8 demonstrates some subsequent distortions.  And, example 9 presents my painting as it currently appears. It is in transition.

Example 7. One of the original photos. 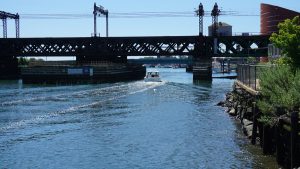 Example 8. One of the later layered photo distortions. 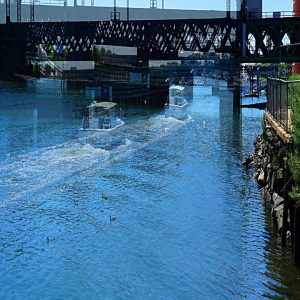 Example 9, the painting in its present state. 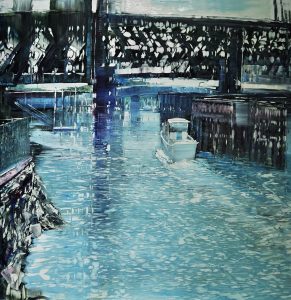