We derive much of our image of landscapes from the poet, Virgil of ancient Rome. His ideas were read and interpreted by artists like Nicolas Poussin in the 1600s.  Poussin kept to ancient classical themes while updating the form of his ideal landscape.  These landscapes were framed on the sides by trees and clouds acting as theatrical curtains. We refer to them as the coulisses. Through these curtains of trees we seek the luminous distance beyond.  In his landscapes Poussin also introduces water features in the foreground or middle distance as you see in example 1. 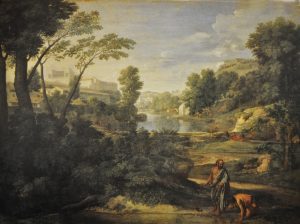 Landscape artists of the 18th and early 19th centuries used Poussin and Claude as models for structure and subject ideas.  Italian, French, English and American Hudson River painters borrowed the Poussin/Claude formulae.  The model mutated with each artist. By the mid 19th century Victorian watercolorists evolved the model into a carefully depicted idea known as the “Picturesque”.  Example 2 (Wilson watercolor) demonstrates such a carefully realized ideal landscape. We still look through the coulisse of framing trees toward a luminous distance. A subtle water feature can be seen in the lower right; it’s a brook winding toward a bright and infinite pastoral distance. 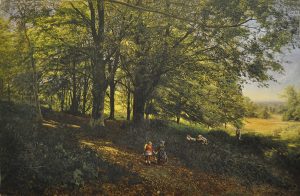 In my own example I borrow the idea of seeing through a screen of trees looking toward the distant light (example 4, painting). I also use a foreground water feature as way of carrying you across an intimate, fertile, shimmering foreground toward a distant bucolic and luminous meadow.  I discovered this subject two weeks ago in Acadia National Park in Maine. I began to rethink my composition by layering photographs in Photo Elements until I had new ideas with which I could further experiment in paint (example 3, layered photo).

Example 3. A composite layered photo, one of many from which I would begin my painting experiment. 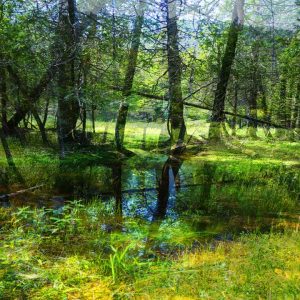 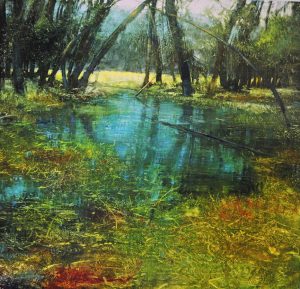 My third historic example is another Victorian watercolor by Walter Tyndale from the 1870s (example 5).  Here the form has been modified to include Japanese influences from woodblock prints. The horizon is pushed higher.  We cross over a hedge of wildflowers with their top edge acting as a field of light.  As you see in examples 6 and 7, I too begin with a hedge of flora at the base of the picture plane (along the ground plane). The image then fractures into a field of water covered with flora which slowly dissolves across the distance. The high horizon is isolated by bands of light, both above and below the far line of distant trees. 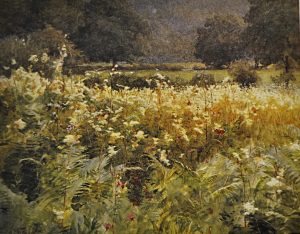 Example 6. Step one of my lake side landscape, 36×36, oil on laminated aluminum. 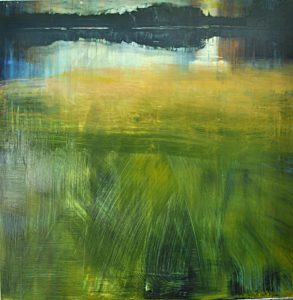 Example 7.Step two, present state of the lake side landscape. 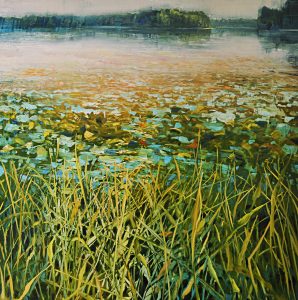